Our volunteer spotlights continue, highlighting the many ways volunteers are serving the community and helping our neighbors in need! For more information on how you can get involved, visit www.neighborsmn.org/volunteer.

Gayle C. is a valued member of one of Neighbors’ most important client-facing teams: the front desk staff. As part of this role, Gayle fields calls, greets clients and visitors, files documents, and restocks bread and produce in the lobby. 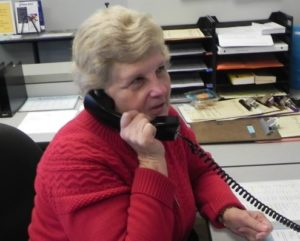 Gayle likes to keep busy. “I don’t like sitting around because I’ve been working since I was very young,” she says with a quiet humility. As the second-oldest in a family of 15 children, Gayle accrued responsibility early in life, both on the farm where they lived and in their home. She recalls each child taking part in the farm’s upkeep. “It was like an assembly line, everybody had their role,” she says, giving a small chuckle.

One thing you’ll immediately notice about Gayle is an unassuming subtlety to her demeanor that simultaneously begets respect and comfortability. “What have you learned while volunteering?” we asked her. “What keeps you coming back?” She thinks for a moment before answering, and then, as if reflecting on a lifetime of working for everything she’s earned, says, “Love and appreciate what you have in the refrigerator.”

Prior to retiring and her subsequent involvement with Neighbors, Gayle worked in insurance claims. A job, she says, which prepared her well for the role she currently holds at Neighbors. Gayle started volunteering at Neighbors after her friend Mary invited her to Neighbors’ annual volunteer luncheon.

Never the idle type, Gayle is involved with a multitude of activities outside of Neighbors. She enjoys spending time with friends, taking classes at the YMCA and is a member of a garden club. Gayle’s commitment to community service extends beyond Neighbors as well: she regularly volunteers at Holy Emmanuel Lutheran and Cornerstone churches with her sister, helping out at funerals and collecting food for the Volunteers Enlisted to Assist People (VEAP).

Gayle is one of many volunteers at Neighbors who bring a tireless initiative and wealth of experience that helps us to be successful. For that, and for her, we are thankful.