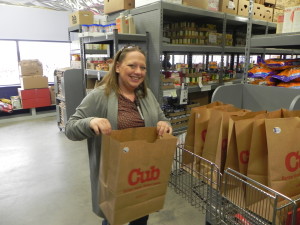 Neighbors’ Volunteer in the Food Shelf

The quality programs and services that Neighbors provides to the community are made possible because of the selfless effort and dedication of our volunteers. Neighbors volunteers come from many backgrounds and serve their community for many reasons. All are celebrated for giving their time to support Neighbors and assist people in need. Learn more about some of our volunteers below.

Dedicating time to the Holiday Program, Les McKenzie has been volunteering for Neighbors for six consecutive years. Comprised of “Adopt a Family” and “Love Your Neighbor,” the Holiday Program provides food and gifts to almost one thousand families in the community each year. Les says that a friend asked him to help out one Christmas at the organization with food distribution. Les has been going back ever since.

“I get a lot of satisfaction from doing it,” he says. He marvels at how there are so few mistakes in a program that serves several hundred families each year.

Over the years Les has seen and heard many sad stories about families and their physical and financial conditions and says that Neighbors makes a strong impact on the lives of so many. He often hears, “You made our Christmas,” from recipients of Neighbors’ aid, and says the appreciation and smiles of kids and their parents makes it worthwhile.

He also mentions the abundance of generosity from families and companies that provide gifts and clothing is nothing shy of amazing. “I am just overwhelmed by the magnitude of the service generated, with 998 families in the Christmas program alone,” states Les. “What would happen if Neighbors was not around?. – Karen Schupp, volunteer columnist

Gail has volunteered at the Neighbors’ Clothes Closet for nearly three years. From receiving pick-ups, to sorting and arranging items, to managing the cash register, Gail is very familiar with the daily operations of the Clothes Closet. 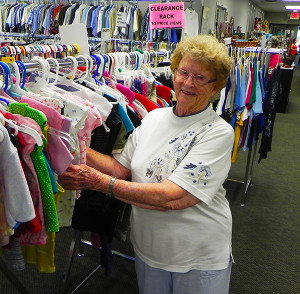 Prior to joining Neighbors, Gail was looking for something to keep her occupied after her mother passed, whom she had been taking care of for three years. She was in Walmart when she noticed that a food donation bag there had “Neighbors” written on it.

Not quite ready to go back to work, Gail decided to look into the organization for volunteer opportunities. Impressed and interested, she talked to one of the other volunteers about helping out one day a week. “After I was there a while, Virginia (a Neighbors veteran) asked me if I could work another day (‘and everyone knows you don’t say ‘no’ to Virginia!’)… I ended up working three days a week.” Now back to full-time employment, Gail volunteers Saturday afternoons twice a month.

One of Gail’s favorite stories regarding her experience at Neighbors involves a woman that came in to the Clothes Closet with her two kids. The three were looking for items for their apartment after the mother had lost her husband, job and home all within 30 days. Simply put, Gail said that assisting them was “quite humbling.”

When asked what she enjoys most about her volunteer service at Neighbors, Gail responded: “the people—both customers and volunteers.” She added, “I like the Clothes Closet, because there is always something to do… and getting to see what is in the box or bag of donations makes it seem like Christmas!”

Gail helped to start the new Saturday afternoon shift for the Clothes Closet, and has recently led orientations for new volunteers. This added shift has benefited both the customers—so they can shop longer; and the organization—in order to assist additional people in the community. – Karen Schupp, volunteer columnist

Mary Lou just completed her sixth year with Neighbors, volunteering annually for the Holiday Program. She got involved after responding to an advertisement posted in a local newspaper for assistance in the program. Recently retired at the time, Mary Lou thought this would be a good opportunity to give back to the community, and it was also related to her line of experience—social work.

When asked what she enjoys most about volunteering at Neighbors, Mary Lou said it is nice to have interaction with a diverse group of people, and “[it is] interesting to see the amount of people step forward—and the good that comes from it all.” She also mentioned the dynamic environment keeping her inspired, with different genders, ages, “and all have their own story.” She says that the wonderful staff and volunteers of Neighbors is impressive. With their high spirit and compassion, “they do a lot with very little,” Mary Lou said.

Among the numerous families that she has seen benefit from the efforts, care and contribution from Neighbors’ volunteers and donations, Mary Lou mentioned one family that stuck out in her mind. Over the past three or four years she has seen a couple come in for the Holiday Program. The first time they were in, they were a recently-married couple with a child, struggling financially. Mary Lou says, while things are still tight for them, it’s neat to see how far they’ve come. “It is a privilege to see the whole thing unfold; [the couple] are in it together,” she added.

While she volunteers with other organizations throughout the year, Mary Lou has been back to Neighbors ever since her start in 2002 for the 6-week duration of the Holiday Program. “I think I frankly get more out of this than the recipients,” she commented. “I’m just very proud to be a part of it.” – Karen Schupp, volunteer columnist 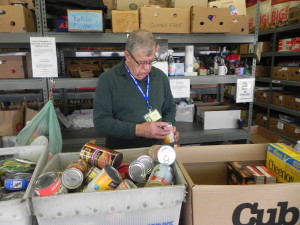 Ceil and Jim are volunteers at the Neighbors’ Food Shelf where they help out about two to three days per week. Jim, now on his 7th year with the organization, started out with the Holiday Program. His wife, Ceil, joined later (now with five years at Neighbors), and says that Jim liked it so much she decided to help out, too. Both were looking for something to do in the wintertime, and have been active volunteers with other organizations in the surrounding community.

After some time with the Holiday Program, they found out about helping at the Food Shelf, and they’ve been “downstairs” ever since. The two also pick up bakery goods from Cub to bring in to Neighbors each Friday morning.

Among many special memories for Ceil, one experience while volunteering at Neighbors is her favorite. A few years ago while serving during the Holiday Program, Ceil was approached by an older woman who came in with her grandson. Because the child’s parents were not around anymore, the woman—who had had a stroke and was partially blind—was seeking assistance during the holidays. Ceil assisted the woman to receive the support she required by helping her to fill out the application as the woman was unable to write. Ceil reports that the grateful woman cried and hugged her for her help. “…Probably one of the most touching moments I had,” mentioned Ceil.

Ceil says that they love the people with whom they volunteer, and they get a great sense of satisfaction by being able to help others. “I love the people we work with; they’re great, great to volunteer for,” says Ceil. She also spoke highly of the management at Neighbors. “Anything you ask for, right away [the staff are] there to help you…they don’t seem to let a thing go by. – Karen Schupp, volunteer columnist