For Commissioner Joe Atkins, it all started as a result of three poignant moments in June of 1997. The first moment was when he read a news story about a local third grader in need of food during the summer months. The second moment happened as a result of his cousins teasing him about elected officials only waving in parades. And the third moment was prompted by a spur-of-the-moment conversation with Neighbors’ Executive Director at the time, Harv Bartz.

“Harv told me that the food shelf inventory is really low during the summer months, so the idea came to me that in the Inver Grove Heights parade coming up, I would collect food during the parade instead of just walking and waving!”

Since that time, Joe and a crew of volunteers have collected more than 35,000 pounds of food to help stock our shelves. Today, with the help of so many great volunteers and generous donors, this 23-year tradition lives on. This year, in partnership with Hometown Meats, On Thursday, September 5, a “Big Tent Event” was held where 1,180 people came to celebrate the community and enjoy free hamburgers and hotdogs while also serving as a food drive for Neighbors, Inc.

When asked about his role in all of this, Atkins humbly explained, “All I do is organize it, and push a grocery cart.”  He was quick to thank the many loyal volunteers that make it happen: the Simley Boys and Girls Soccer Teams, Mayor Tourville, the Inver Grove Heights City Council, Drkula’s, CUB, Rob from Hometown Meats and so many more!

So why does he do all this? Joe’s answer is that he supports Neighbors work in the community because “Neighbors (Inc.) isn’t just a name, it is literally who you are – your work is woven into the fabric of the community and it is part of what makes it run.  What you do, is what good neighbors do for each other, they take care of each other.”

Thanks, Joe, for helping us serve our community! 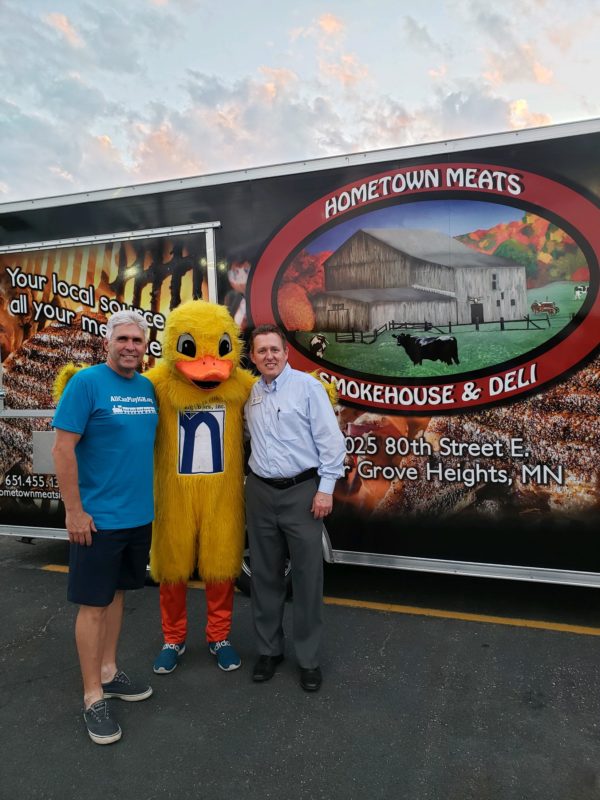