A small group of burger lovers from the TC Burger Club recently went on an adventure in Inver Grove Heights to try four of the eight burgers competing in this year’s Great Neighbors’ Food Fight competition and fundraiser. Here is what they had to say about their fourth and final stop of the night:

Half pound burger topped with our house made creamy bacon spinach dip and served with mixed greens, tomato, red onion and house made pickles 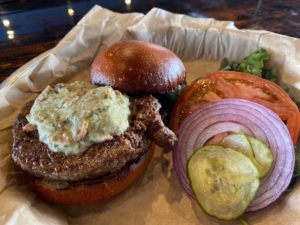 Most people go to breweries for the beer, and that’s a good enough reason to check out Inver Grove Brewing Co., but the burger they whipped up for their first Food Fight is good enough to pair with any of the brews they pour in a pint glass.

Beginning with fresh beef that is loosely packed, this patty feels like less than a half-pound in the best way possible – not too heavy and full of great flavor. The delightfully juicy burger is topped with IGB’s house made creamy bacon spinach dip (more on this below) and held together by an airy bun that was baked and grilled with precision.

Back to the creamy bacon spinach dip, which is so tasty we all agreed we would have eaten with anything (crackers, crunchy bread, crumpled paper); it is clearly the MVP on a team of flavors that PJ Fleck would describe as “elite.”

Stay tuned: members of the TC Burger Club will be back soon to review the remaining four burgers in this year’s charity competition!